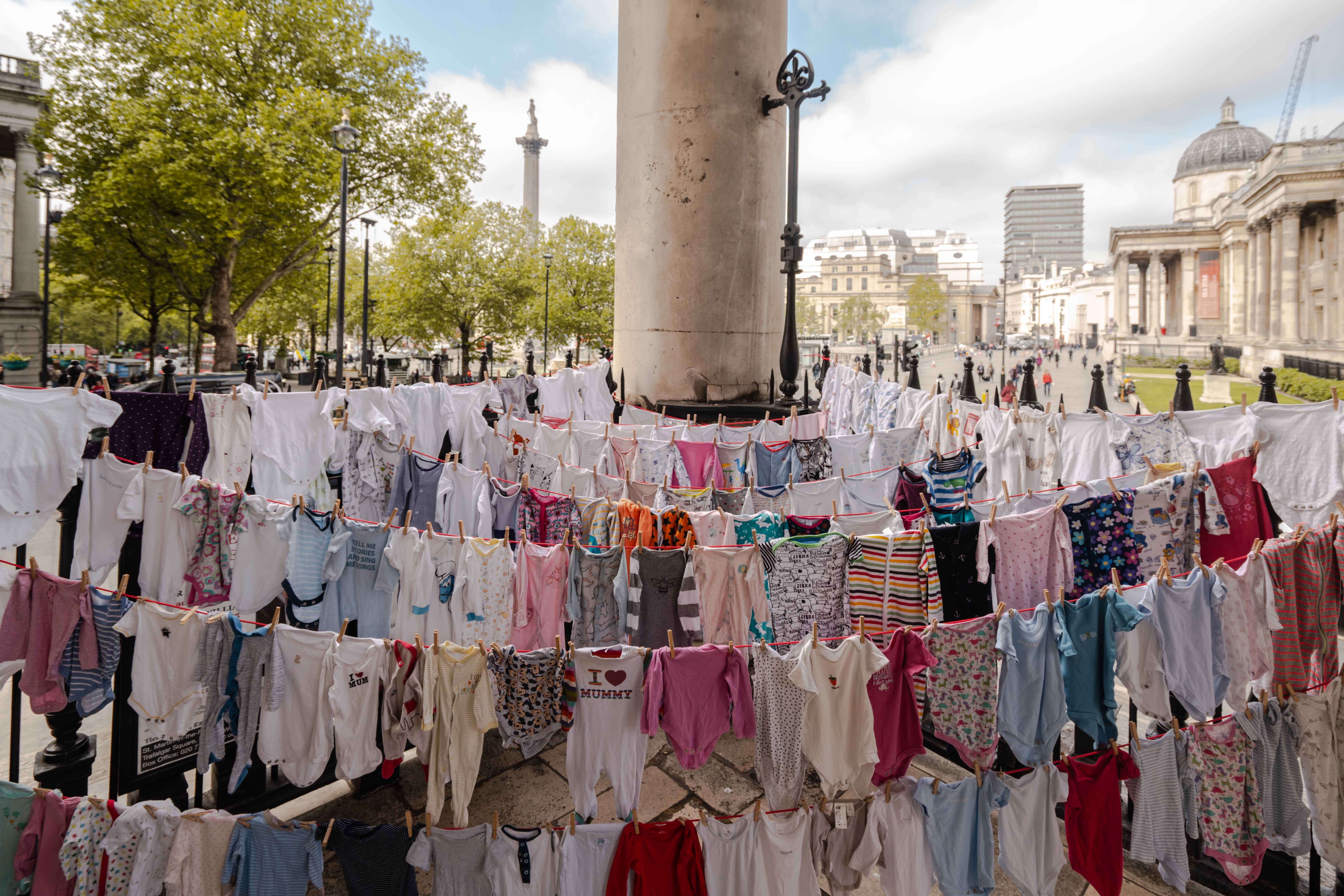 One hundred and fifty baby grows donated by mums from all walks of life, including MPs, broadcasters, actresses, bloggers and faith leaders have been displayed outside a famous London landmark as a symbol of solidarity with mothers in Sierra Leone – the most dangerous place in the world to give birth.
The installation has been placed in and around St Martin-in-the-Fields on Trafalgar Square in London, as part of Christian Aid Week (12-18 May), to illustrate the stark reality that women in Sierra Leone are 150 times more likely to die in childbirth than those in the UK.

The charity is hoping the installation will draw attention to the high maternal death rate in Sierra Leone, where women face a lack of access to healthcare facilities or health professionals. The West African country is the most dangerous place to give birth in the world, with an estimated 15,000 mothers having died during childbirth since the Ebola crisis in 2014.  For every 100,000 live births, 1,360 women die in Sierra Leone, compared to nine women in the UK.
Christian Aid’s media & PR lead Chine McDonald said: “Pregnancy and birth can be an anxious time no matter where in the world you live. But as the world celebrates the birth of a new royal baby, let’s spare a thought for the women of Sierra Leone for whom pregnancy and childbirth can be a particularly terrifying time due to the country’s extremely high maternal death rate.

“We are very thankful to the mums from all walks of life who answered our call to donate baby grows to this special project. We believe something beautiful happens when women stand together. We hope that this Christian Aid Week we will all stand up for mums in Sierra Leone and give generously to support our work alongside local partners to build more health clinics, so that pregnant women can deliver their babies safely.”

Christian Aid is also inviting supporters to join its campaign to drop Sierra Leone’s debt that was incurred during its fight against Ebola, in 2014-2016. It was the worst outbreak of the disease in history, killing 10% of the country’s healthcare workers. Debt repayments are taking money away from improving healthcare services that is so desperately needed.

All photos can be downloaded here.

To find out how to get involved in Christian Aid Week or to donate, visit caweek.org or call 08080 006 006, or text ‘GIVE’ to 70040 to give £5.* Donations will support communities such as those featured and wherever the need is greatest.

*You will be charged £5 plus your standard network rate. Christian Aid will receive £4.88 of your donation. By texting, you are agreeing for Christian Aid to phone or text you to tell you about our work and how you can help. If you wish to donate and not hear from us again, text GIVE NO to 70040. For more info call 020 7620 4444. Your gift will support communities such as those featured and where the need is greatest.

Our media and communications team is availabe 24/7.

We have more than 70 years’ experience of working in partnership to support communities to thrive. We tackle the root causes of poverty so that women, men and children the world over are strengthened against future knocks. And if disasters happen, we get people the help they want straight away.

Read about our aims and values

How can you help?